Automotive blogs have been buzzing this weekend after GM debuted the new 2014 Corvette Stingray at the Detroit Auto Show. This car has all the ingredients that Corvette fans have come to expect; great looks, effective aerodynamics, amazing handling, and a big engine. Designers have really outdone themselves this time with an edgy look that has hints of Italian sports car styling to it.

This new model dons the iconic “Stingray” title that was first introduced in 1963. The original Stingrays have now become one of the most sought after Corvettes in the collector car and restoration world. We’re a bit biased, but when we heard the Stingray name was brought back we were a bit skeptical. How much could a modern sports car have in common with the original from the 60’s? After seeing the shot of the back end of the car, my tune was changed a little. It doesn’t have the iconic split back window that makes them so sought after, but it does have a similar look if you squint your eyes just right. We can definitely see that GM designers had some old photos of a split window Stingray in front of them when doing their initial sketches, but it’s hard to modernize an iconic classic. 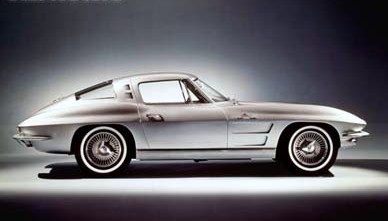 The base model engine in the new C7 Corvettes boast the largest to ever come standard in a Corvette; a 6.2L Small Block Chevy V8 producing 450 Horsepower and 450 Torque. Corvette fans can always count on a big engine and lots of power..well sometimes. What we mean is, GM has now made cylinder deactivation standard on ALL Corvette models (including the manual transmission!). Now when you’re cruising at low engine loads it will drop out 4 of the 8 cylinders. This is great for fuel economy (26-MPG highway), but bad for anyone that wants the growl of a V8 at all times. GM has even come up with a multi-valve exhaust system to tame the noise even further during four cylinder cruising. We know that MPG rules the new car market, but we didn’t think it would start hitting the sports car world! I can’t wait for the automotive tuning world to get ahold of the new Stingray and give owners the option to leave the exhaust open at all times and run with full power when they want!

Did you miss the reveal and want to see what all the hype is about? Check out the virtual debut on the Chevrolet website here: http://www.chevrolet.com/new-2014-corvette/